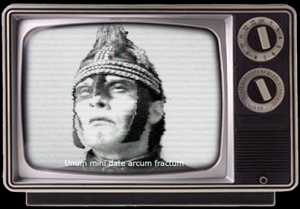 To give you a taste of what to expect, we’ve reposted an excerpt from the NEW YORK TIMES review of City Opera’s VOX festival, where 3 Weeks was first performed.

“Only the weekend’s final selection, Yoav Gal’s “Three Weeks,” seemed truly fresh: quite an achievement considering that its libretto, by Reuven Namdar, is in Hebrew, Latin and Aramaic and that its plot takes place around A.D. 70. An episodic stylized story of the rabbi who tries to save Jerusalem from Roman invaders, it manages to be serious without being ponderous.  Scored for three trombones, piano, percussion and double bass, the music has a brassy, sinuous klezmer flavor;  its vocal lines recall traditional Hebrew melodies without seeming stale.  From the start, with a tantalizingly strange short video element, there was a feeling of slightly manic, ramshackle energy.  The piece is not afraid to play with operatic conventions, as in the Roman general’s exaggerated coloratura, but neither is it emptily ironic.  It was unpredictable-sometimes absurd, sometimes sincere-but with a core of real feeling.  You didn’t know what was going to happen next.  It ‘s impossible to say what it will eventually amount to, but alone among the works at this year’s Vox, it felt new.”