On Thursday, February 26, LABAlive will present “Creating Time,” an evening of innovative culture and subversive teachings exploring our relationship with time. The evening will feature curator Daniel S. Palmer talking about a new digital curatorial model, teacher Ruby Namdar explaining the relationship between creation and time and Benjamin Kamine presenting an excerpt from a brand new project, “Promised Land.”

Kamine talks about his new project and the inspiration he found in our house of study.

Tell us about your project.
I asked LABA to commission a new play for me to develop with Ari Stess, a writer I have been wanting to work with for a long time. The play, called “Promised Land” will follow a family across generations. Here’s the synopsis:

While World War II rages on in Europe, three Jewish students from New Jersey decide to escape familial pressures by train-hopping to the New Mexican frontier to build a new life in the desert. Before long, news of the Holocaust has scared their parents into joining them and a misunderstanding about nuclear testing forces all three families underground for seventy years. In 2015, their descendants are discovered, and they emerge into the modern Jewish community, a community radically altered by the devastation of the Holocaust and the creation of the State of Israel. With the world watching, how will they engage with what they find?

Basically, I wanted to look at the way in which the generational trauma of the Holocaust has affected the way we look at the state of Israel and our identity as American Jews. For the presentation, we’ll do a reading of about twenty minutes of text that Ari has written.

How do you see it developing in the future?
We’ve reached out to a few institutions, both Jewish and not, in the hopes of finding an opportunity to more fully develop the play. And then, of course, once there’s a strong draft, we’ll be looking for a production.

Any new thoughts about time?
Actually, a ton. This exploration, both through the LABA texts and through my work with Ari, has gotten me thinking about the construction of what we’ve deemed sacred time. How do we build rituals and how do they gain significance? In modern life in the US, there’s a lot of cultural discussion of mindfulness and being present, often through the lens of Eastern philosophical and religious traditions. But the LABA study has reminded me that Judaism has something to say about that. We “daven” [pray] with intention all day long, saying “brachas” [blessings] before and after eating, for example. I’ve actually started saying “Modeh Ani” [the blessing you say upon waking] every morning when I wake up. I just open my eyes and say it slowly and with intent before I do anything else. It prepares me for the day in a completely different way.

For most of my adult life, theater has been my way of being present and mindful. I turn off my phone when I walk into rehearsal or when I sit down to watch a show. I am fully engaged with the people in the room. It’s been wonderful to reconnect with the Jewish approach to time.

Which texts that you studied this year so far have most stuck in your mind? Why?
A bunch have. But the most significant for me has absolutely been the exploration we did of Shabbos in the desert. Ruby [Namdar] completely reframed this for me. I have always thought of the generation that left Egypt in a negative light. G-d does this great miracle for them, which they have seen with their own eyes (10 Plagues, Parting of the Red Sea, etc.), but they are constantly freaking out, wishing they were back in Egypt, building idols, and just generally being pretty ungrateful. Well, when you look at the story of the manna, you realize that G-d really isn’t thinking too carefully about their very human needs. It is six weeks of wandering in the desert before manna is provided, and even then, there’s big punishments for anyone who tries to collect on Shabbos. Which, when you think about it, is really terrifying. You’re in the desert, you’re hungry, and the guy who’s leading you says, “G-d spoke to me and said, take a day off from collecting food every week.” It’s a huge leap of faith, one I don’t think we appreciate in the era of 24 hour convenience.

How have they, or other texts, inspired this work?
Ari’s play is about a community of Jews surviving on a subsistence farm in the desert. Keeping Shabbos is harrowing in exactly the same way as what I was describing above. 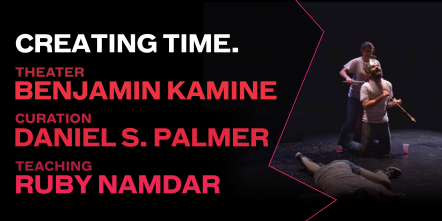 THE THEATER AT THE 14TH STREET Y