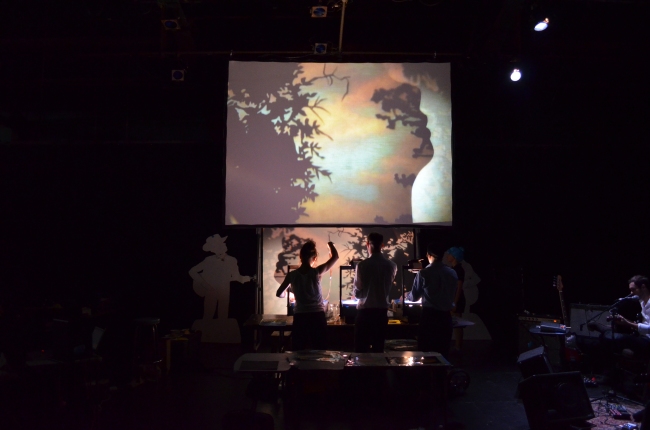 Each year, about 800 theater pieces from around the world apply for the New York International Fringe Festival (FringeNYC). When Julia Miller applied with her Chicago based company Manual Cinema, she had no idea that not only would her piece be selected- it would be randomly assigned to the Theater where her twin sister, Dinah Miller, works as the Technical Coordinator.

We sat down with Julia to learn more about her piece, Lula Del Ray, and about their journey to NYC and the 14th Street Y this summer.

14th Street Y:   Tell us about Manual Cinema- what gave you the idea to start it?

Julia: I did a shadow puppet version of Swan Lake with the Chicago Symphony Orchestra and Redmoon Theatre in Chicago. We used two overhead projectors and paper puppets to tell an adaptation of the story. I liked the medium so much I wanted to try making my own show so I got some friends together and made The Ballad of Lula del Ray. We liked working together so much we decided to form a company.

14th Street Y: We hear you have a personal connection to the 14th Street Y- tell us about it!

Julia: My twin sister Dinah is the technical coordinator for the Theatre. Being all the way from Chicago and a pretty big tech heavy show we were so thrilled to have a person so familiar with the space and familiar with our work. We don’t think it would have worked out so well without Dinah’s help. It made coming to New York with our show seem way less daunting.

14th Street Y:  What is it like to be part of the Fringe Festival?

Julia: The Fringe Festival is a pretty crazy event. There are 12 shows alone sharing the theater at the Y  so scheduling is pretty tight.  That means set up and strike need to happen very quickly. We actually had to rehearse setting up and striking our show in 15 minutes so we could be prepared for Fringe.

14th Street Y: Tell us a little about Lula del Ray- how is it different than other Fringe shows?

Julia: Lula del Ray is a feature length cinematic shadow puppet show performed with overhead projectors, shadow puppets, actors in silhouette, and live music. Told almost entirely sans dialogue, experiencing Lula del Ray is like watching an animated film that is being made by hand right in front of you.

One thought on “Two Sisters, Hundreds of Shadow Puppets- One Amazing Fringe Show”